Praise for Henry George and the Crisis of Inequality

“This social biography of Henry George is a beautifully written, deeply researched, carefully argued, and analytically nuanced book. O'Donnell's own prodigious research, as well as his talent for synthesizing the findings of other scholars, makes this a social and political history of Gilded Age America as seen through the lens of Henry George's extraordinary life.”
-- Daniel Czitrom, Mount Holyoke College

“We have long needed a modern account of the ideas of Henry George, in the context of the vast inequalities of wealth of the Gilded Age, the rise of a powerful labor movement, and George's campaign for mayor of New York City in 1886. Edward O'Donnell has now provided it, in a fascinating book that shows how the social realities and conflicts of that era speak to our own unequal times.”
-- Eric Foner, Columbia University

“At a time when issues of social inequality have moved again to the forefront of political debate, it is good to remind ourselves that throughout the past two centuries, Americans have passionately contested the severe inequalities that went along with the spectacular economic development of the nation. In the nineteenth century, few voices were as powerful, and had as lasting an impact as that of Henry George. Edward O'Donnell's political biography is a brilliant introduction to George's life, ideas and politics--showing that inequality can generate political movements that challenge the rich and powerful. Highly recommended.”
-- Sven Beckert, Harvard University

Description of the Book
Henry George and the Crisis of Inequality: Progress and Poverty in the Gilded Age is a social biography of the reformer Henry George and his most important years of public activism in the 1880s. Born in 1839, Henry George grew up in Philadelphia and later moved top California where he became a journalist. In the 1870s he became deeply troubled by the increase in poverty and social tension across the nation even as industrialization benefitted many and enriched a few. He responded by writing a book -- Progress and Poverty (1879) -- that addressed the vexing question of, Why did industrial progress seem to increase poverty and social inequality rather than diminish it? His answer was land monopoly. Large corporations, Wall Street wizards, and land speculators, he argued, had seized control of the most basic resource needed for economic success and upward mobility. As a result, the average American worker and farmer found himself slipping into low paid wage work and despair, a process that threatened to destroy the republican society established by the Founding Fathers. His solution was the "single-tax" on land values. While not everyone supported this solution, vast numbers of Americans--especially wage workers--read Progress and Poverty and came to accept its critique of laissez-faire industrial society. As a result, in the early 1880s George went from obscure San Francisco editor to a nationally (indeed, internationally) recognized social reformer. The culmination of this remarkable rise came in 1886 when George was nominated as the candidate for Mayor of New York City by the United Labor Party. Whereas labor party candidates in this period usually garnered a few hundred votes, George stunned observers by polling over 68,000 and nearly winning the election (he finished ahead of the Republican candidate, the young Theodore Roosevelt).

Henry George and the Crisis of Inequality examines both the rise of Henry George and his influence on the era, but also the wider context of Gilded Age America and the social turmoil and bitter debates over how best to control an industrial system that produced unprecedented progress and wealth, but also unprecedented levels of poverty, suffering, and alienation. Through it all what emerges is a compelling case for seeing Henry George as one of the first and one of the most influential social reformers in the Gilded Age whose writings and activism prodded Americans to conclude that a laissez-faire economy and minimalist government, while appropriate for the agrarian economy of the Founding Fathers' generation, spelled doom for the modern American republic in the age of industry. In other words, Henry George played a key role in promoting the idea that some level of government intervention in the economy--what the next generation of reformers would call "progressivism"--was necessary for the maintenance of America's republican society and its revered principles of equality and the common good. 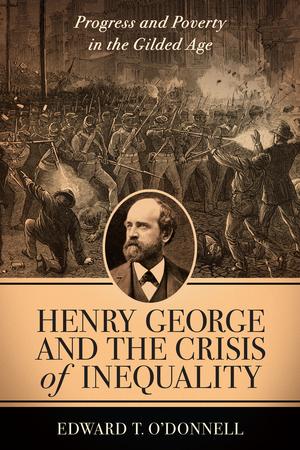 Read an Excerpt (from the Introduction)