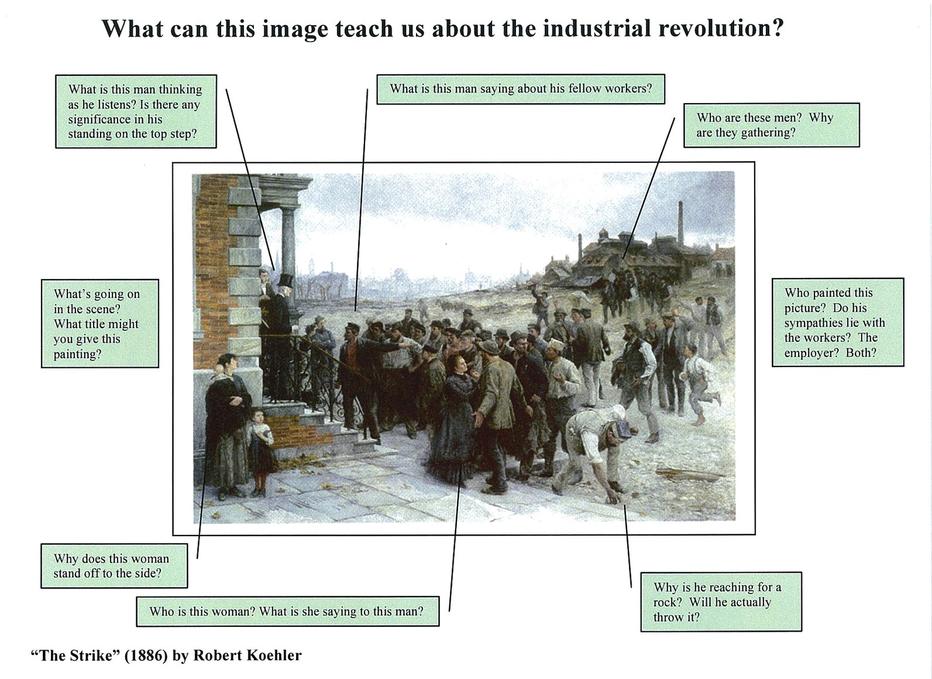 Research – using the information about the image you have provided (the date of the image, the name of the person who created it, etc) your students can conduct further research into its origins and historical significance.  For example, after studying a few of Dorothea Lange’s photographs of Japanese internment camps during World War II, students conducting additional research would discover that her opposition to the internment program shaped her choice of subjects and symbols in her photographs.  This follow-up research has the additional benefit of showing your students how to find and use other visual primary sources on their own.

Create links between images and written primary sources – pairing images with written primary sources can be a very effective way to draw out the key ideas in the latter. For example, using Paul Revere’s handbill depicting the Boston Massacre in conjunction with written documents on the event will help students understand more fully how and why some interpreted the incident as an example of rising British disregard for the rights of American colonists.

Other image-related activities
1. simulations and dramas – ask your students to develop a simulation based on an image or set of images.  For example, using photographs of lunch counter sit-ins from the Civil Rights movement, students could take on the roles of the various figures involved to explore the different sides of the controversy.  Teachers might want to provide some related written primary sources to inform the students’ knowledge of their characters.

2. short writing assignments – ask your students to respond in writing to a historic image.  Such an assignment might be as small as asking students to write a caption for an image, or it could require more detailed and extensive analysis.

3. image essay projects – ask your students to create an image essay on a given topic such as slavery or immigration. Require them to find a set number of images to explore the key dimensions of a historical issue. Teachers can determine the appropriate amount of writing to accompany this assignment which could range from providing basic captions to an overview essay and extended captions.  Note: it is essential that students distinguish between images that are primary sources – that is, images produced in the period being studied – and images that represent imagined recreations of historical events. The latter are not necessarily illegitimate, but they should be used with care.Type your paragraph here. 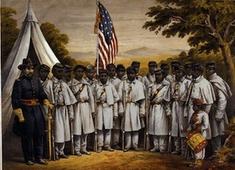 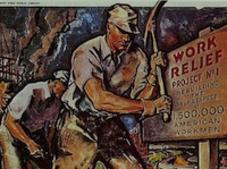 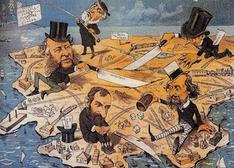 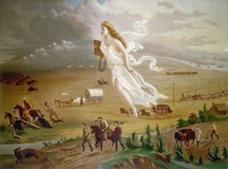 Step-by-step analysis – Distribute an image to your students, or project it onto a screen, and ask them to do the following (individually or in small groups) using the

Scan for important details – students often direct their attention to the most dramatic or seemingly central aspect of an image. For example, when shown a lynching photo, students inevitably focus on the mutilated body. We need to help them see more—to note the smiling faces in the crowd, the public square setting, and the presence of children and prominent citizens.  To accomplish this goal, provide students with ample time and urge them to compile a list of significant clues, details, symbols, colors, characters, and layout choices. Ask them also to identify things they don’t understand

Identify the conflict or tension – what problematic idea or controversial issue is being addressed in the image? Sometimes the conflict or tension is obvious, as in the case of a 1912 political cartoon that opposes women’s suffrage.  Sometimes it’s more subtle, like a Lewis Hine photograph of a young child laborer standing amidst a vast complex of industrial machinery.  In other instances, the conflict emanates from beyond the image and its creator, as in the case of the criticism by many African Americans over the depiction of a kneeling slave in the Freedmen’s Memorial Monument (1876).

Guess the creator’s intent or message – what is his or her opinion? What is his or her goal in creating this image?  For example, if they are examining an 1850s drawing of a slave auction, they should speculate on the artist’s position on the slavery question.  Is the artist an abolitionist? A defender of slavery? Neutral?

Hear the voices – many images (like the painting on the reverse side of this sheet) present scenes where dialogue taking place. Ask your students to consider the ideas, issues, problems, controversies they are discussing.  Have them speculate on the attitudes and opinions being voiced. When using an image where no dialogue takes place, ask your students to consider the voice of the creator.  Ask them to write a caption that expresses this voice.

Talk about your observations – students should discuss their findings among themselves and then report back to the whole class. The teacher should facilitate this discussion, compiling ideas on a board, while gradually leading the students to the answers.  The teacher might do this by gradually providing key details of the image like the date, title, and caption.

Today’s students are visual learners.  Effectively used, images can become foundational tools for the teaching of history.  Images, after all, are primary sources.  They can bring to life a historical topic’s essential content and draw out the critical questions, concepts, and ideas of a given historical era.  Students who develop enhanced visual literacy skills come to see that properly analyzed, a picture is worth far more than the proverbial “thousand words.”

But how do we translate this concept of visual learning into a concrete pedagogical strategy in the classroom?  Fortunately, there are many techniques for effectively using images to teach history.

Here are some key steps to consider.